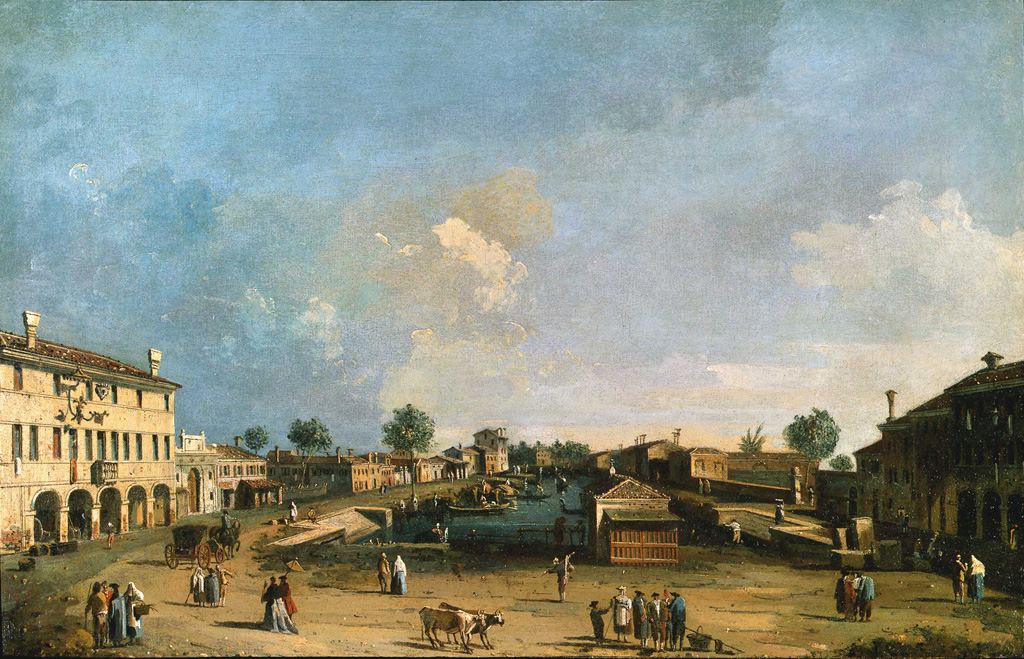 The Riva delle Barche and the Antica Posta, Mestre

In the Windsor drawing, the building on the left, the Antica Posta, has only three arches; moreover, there are differences in quite a few of the architectural details and in the buildings along the Riva. In Canaletto’s paintings and in the related etching the windows have wooden shutters, while there are none in our painting. In Canaletto’s works the small chapel in the centre is enclosed by wooden railings. Built in brick, it reveals a niche which contains a fresco resembling a Crucifixion. Instead, in our work the small shrine has no enclosure, but it is wider and the front wall is covered by a slatted wooden structure which makes it look like a boathouse. Moreover, the perspective is lower, as if the artist had been sitting in the square, thus giving added freshness and immediacy to the picture. What Canaletto shows as stone steps on either side of the water seem here, particularly on the left side, to be rendered merely as sloping surfaces. There are also fewer trees on the right, and fewer, less varied figures in the foreground. Here, too, cattle appear in the foreground, while the coach is moved further back, travelling up the side of the canal instead of towards the large house on the left. In Canaletto’s works, the ensign of a winged lion surmounted by a baldachin can be seen on the corner of the Antica Posta, while in our painting a cartouche and arms appear in a different location. As well as the figures and the carriage, the so-called animazione is greatly at variance with Canaletto’s works, which appear to have been composed in the spring while our painting seems to have been executed during winter. Our version is therefore in no sense a replica of Canaletto’s model. On the contrary it is an original work created by an intellectually independent artist. There is no similarity, stylistically, with the work of Francesco Tironi (active in the last quarter of the 18th century) or with that of Cimaroli. Therefore these two alternative attributions must be discarded.

We suggest that the author of this painting was Canaletto’s nephew, Bellotto, who painted it while he was still very young. Bellotto was born in 1722, the son of Canaletto’s sister, Fiorenza Domenica Canal. He joined his uncle’s workshop in 1735–6, and such was his precocious excellence that he was allowed to join the Fraglia dei Pittori Veneziani in 1738. This date marks the beginning of his artistic independence. Canaletto’s brilliant nephew then started to tour Italy, travelling to Rome, Tuscany, Lombardy and the Veneto, before being hired by the King of Poland in 1748. Bellotto then spent the rest of his life in northern Europe, where he died in 1780. Canaletto’s etching, Mestre, is datable to 1742–3. The album to which it belongs, Vedute, altre prese da i luoghi altre ideate da Antonio Canal e da esso intagliate poste in prospettiva umiliate all’Illustrissimo Signor Giuseppe Smith Console di S.M. Britannica appresso la Ser.ma Repubblica di Venezia, bears no date. However, we know that Smith became consul in 1744. Moreover, in another etching, Veduta Fantastica di Venezia (D. Succi, Da Carlevarijs a Tiepolo, 1983, p.102, no.78), which is also part of the same album, the date 1741 can be seen near the altana (roof terrace).

In Canaletto’s works, the Riva and the square are covered quite uniformly by paving or salizo. *This type of paving does not appear yet in our painting, which, on the contrary, shows a beaten track along the Riva with some areas covered by short grass. This interesting note prompted an in-depth research in the Venetian archives at i Frari, which revealed that it was only in 1739, some years before Canaletto’s etching, that the paving was executed after numerous formal complaints had been submitted to the Magistrato from the Proto ai Fiumi by couriers, tax sub-contractors and postmasters who were interested in obtaining a proper mooring on the Riva (Archivio di Stato di Venezia, Fondo Senato Terra, filza 1893, 9 September 1738, followed by a request to the Senate dated 21 April 1739 and by a report on the completed works dated 18 August 1739).** Therefore, some years before Consul Smith commissioned Canaletto to produce the album of etchings illustrating the mainland in order to stimulate the interest of his wealthy clients, Bellotto, now a young member of the Fraglia dei Pittori Veneziani, visited the mainland, bringing that dynamic spirit of curiosity for which he was renowned. Predating the improvements made to the site in 1739 and over the following years, this is a work – possibly the earliest – which shows Bellotto as an artist emerging in his own right. It shows Mestre as being rustic, not to say poor and shabby, while Canaletto’s works document the new buildings and a marked improvement in trade, perhaps resulting from the War of the Austrian Succession.

In addition to its artistic quality, which justifies its inclusion among Bellotto’s early works dating from around 1738 or possibly before, this painting is a human and cultural landmark. It shows Mestre while it was still a provincial backwater, a time capsule of Venetian rustic life in an important historical periphery. This vision was soon to be cancelled by Mestre’s development in the 19th and 20th centuries, and more recently, unfortunately, by industrial and commercial blindness.

* As kindly pointed out by Ugo Ruggeri. 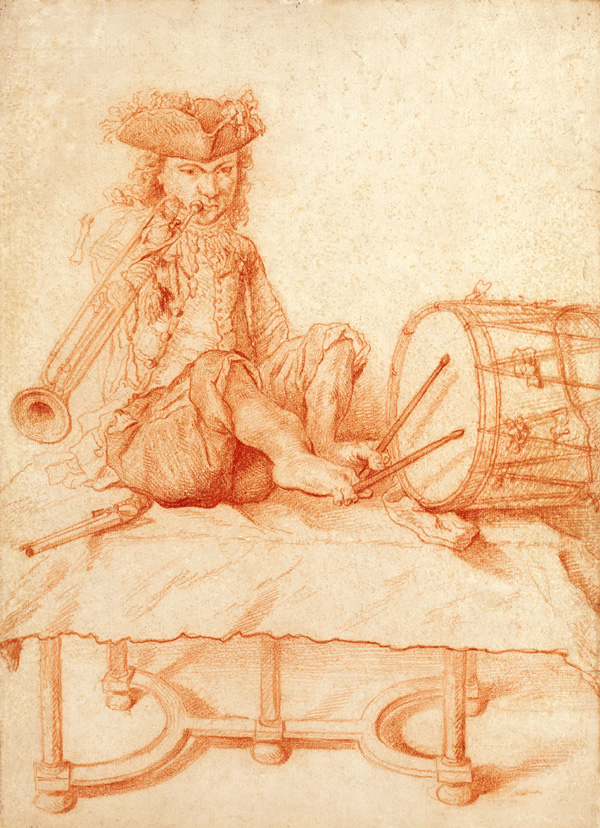 A Disabled Musician seated on a Table, playing a Trumpet, and holding Drumsticks with his Feet 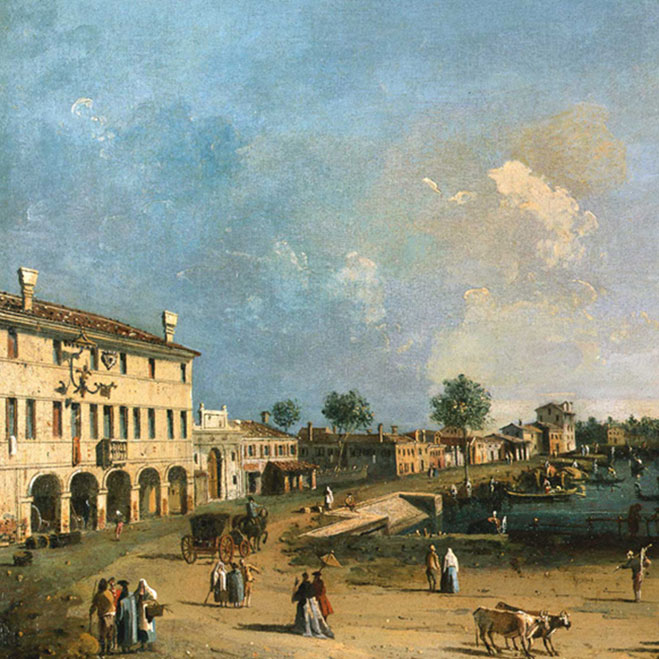 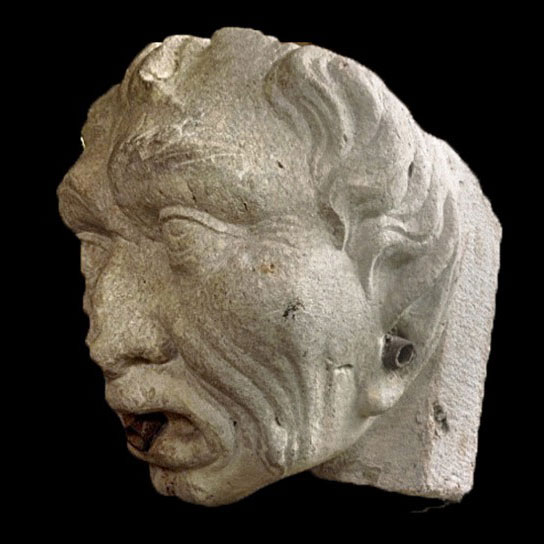 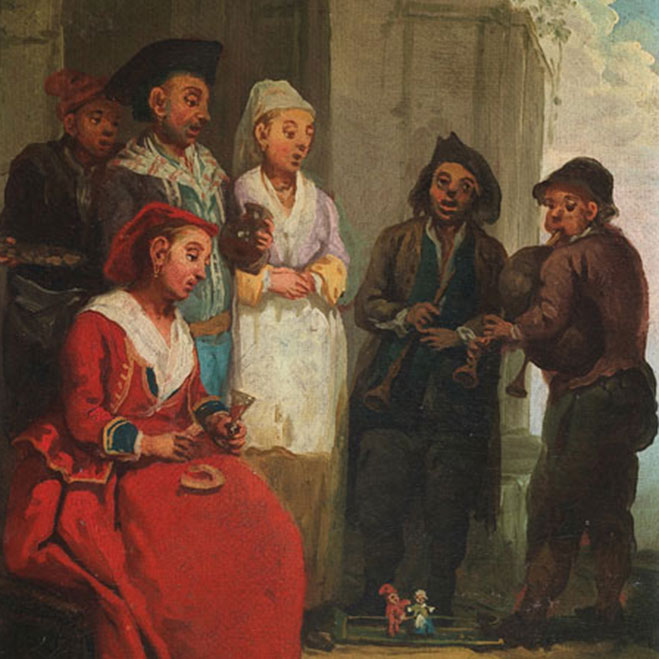 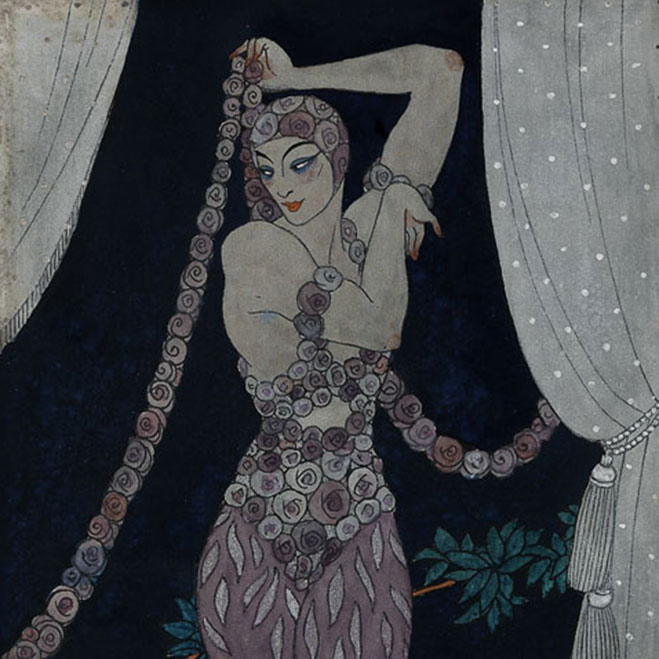 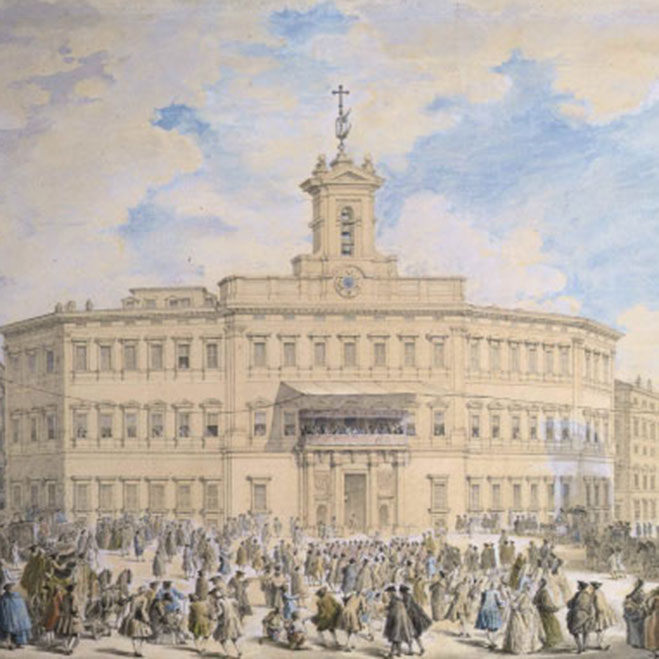 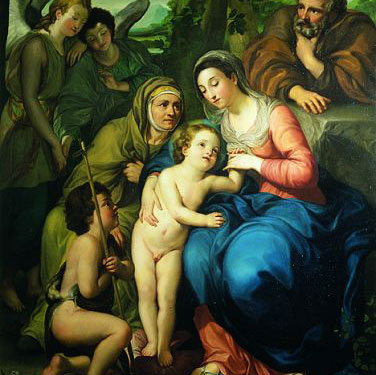 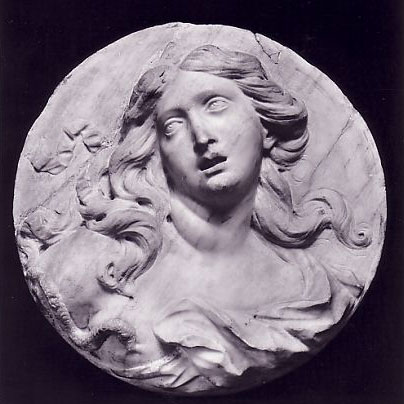 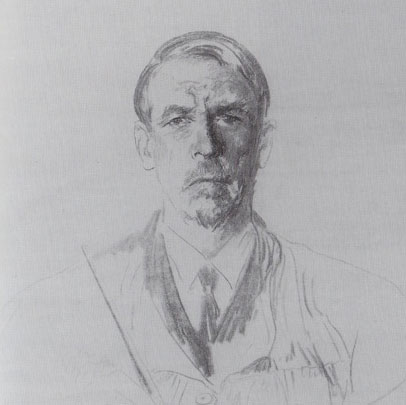 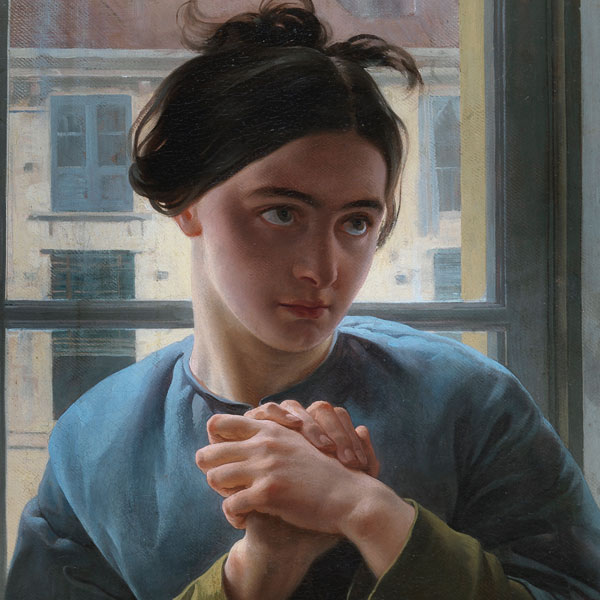 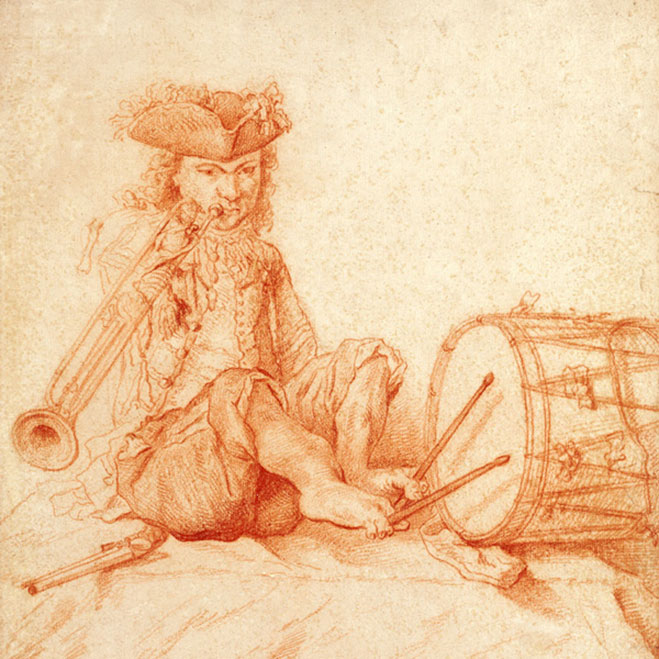